The CSV data file that was used to create this database is also freely available for download.

Only the top matches from within the first 250 search results will be displayed.

Sorry, no results found for this search query. Please try a different search, perhaps one with fewer parameters.

Browse images of the index

The portion of the Nebraska death index covering 1904-1955 is only available as digital images, and is not yet in a text-searchable database format. Luckily, these images are easy to use and completely free. 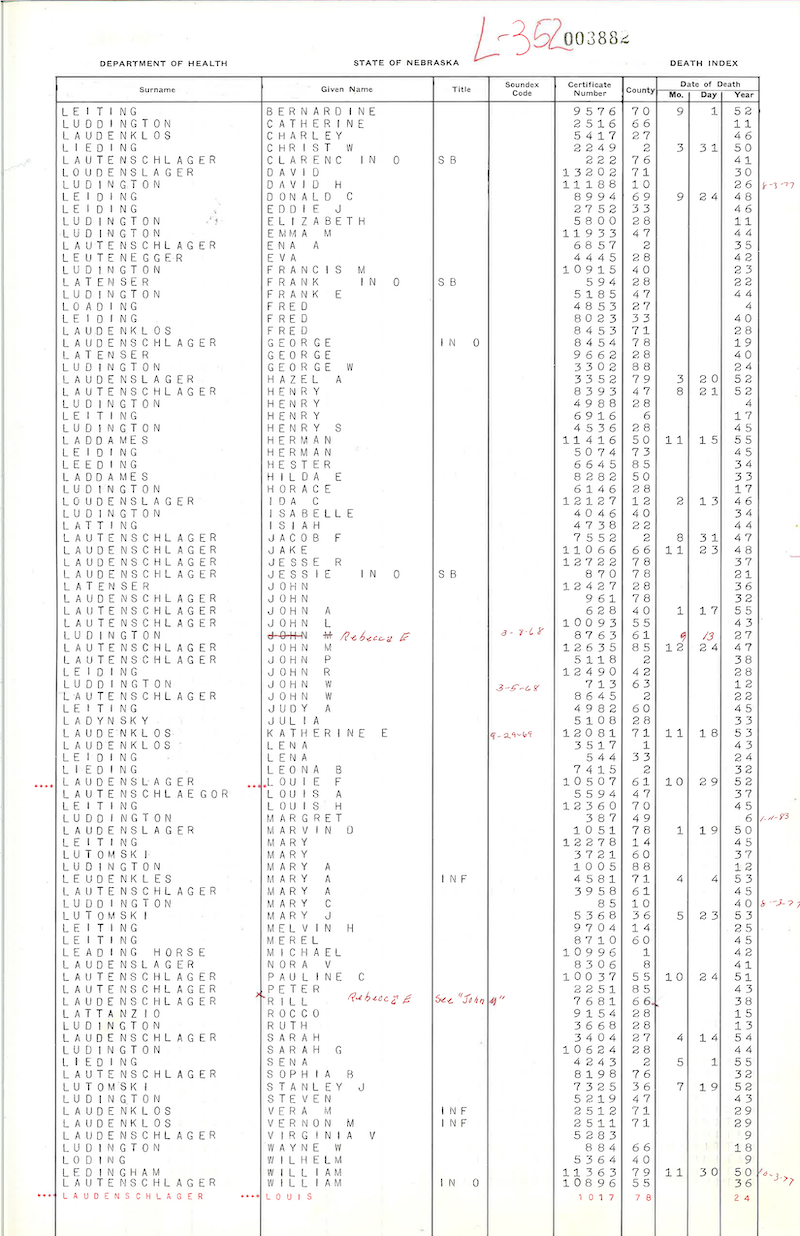 In 2019, the non-profit organization Reclaim The Records made a Nebraska Public Records Law request to the Nebraska Department of Health and Human Services, asking for a copy of the state death index. Most states make some kind of index or finding aid like this available for their historical records, even if the actual certificates themselves may have some privacy restrictions. But Nebraska was unusual in that it had never before released this index for public use.

Although the state was initially reluctant to turn the records over, Reclaim The Records was successful in obtaining two parts of the index: 1956-1968, which is in a text database, and 1904-1955, which was only available in old books that had been printed from some long-ago state database, probably dating back to the punch-card era. But that old database apparently does not exist anymore. So Reclaim The Records paid the state of Nebraska to scan every page of those old books, thereby creating (or re-creating) the first-ever free digital copy of the 1904-1955 portion of the Nebraska state death index.

The surnames in the 1904-1955 portion of the Nebraska death index are listed by Soundex code, not strictly alphabetically by surname. Soundex codes are a way to group surnames that sound somewhat alike, despite having variant spellings. For example, in the image to the left you can see surnames that all have the Soundex code L-352.

The entries in the 1904-1955 portion of the Nebraska death index are then alphabetical by given name within each Soundex code.

You can calculate the Soundex value for a surname using this tool:

Calculate the Soundex value of a surname

As you can see from the sample image to the left, many of the pages of the 1904-1955 section of the Nebraska death index also have handwritten additions or notations, usually in red ink.

Entries may have other notations, such as "Inf of" for "infant of", "S/B" for "stillborn", or "Sis" for "Sister", meaning a nun. However, it is still unclear what all the various notations mean, including the handwritten dates next to some entries, often from the 1970's or 1980's. They

It is likely that various genealogy websites, companies, and/or non-profit organizations may work on projects to transcribe the information from these images, to create a real text database for the 1904-1955 portion of the death index. However, at least as of December 2019, such a dataset does not yet exist.

This record set is only the index to Nebraska death records. If you find a name of a person of interest in this index, you can then place an order for a copy of the original death certificate, which will have much more information on it, such as the person's place of birth, the names of the person's parents and spouse, and their burial location.

Nebraska death records prior to 1904

Nebraska did not begin statewide registration of death records until late 1904, and compliance was not complete for several years. However, some earlier death records were kept by city health departments.

Some Nebraska counties also began recording deaths before statewide registration in 1904. Contact the county clerk for a record search and to obtain copies. Be aware that charges may apply whether a record is located or not.

You can also try checking out these free online genealogy resources for Nebraska deaths, obituaries, and burials.

Nebraska is unusual in that it is a state that does not appear to have any year cut-off when historical death certificates, even uncertified "information only" or "genealogy" copies, can become open documents freely accessible to the public.

Legal parent; Spouse; Child; Attorney; Legal guardian or conservator; Custodian; Personal representative; Executor of the deceased's estate; or Other person showing lawful authority to act on behalf of the deceased

Furthermore, in Nebraska a requester must have and state a "proper purpose" to order a death certificate. But luckily, both "genealogy" and "historical research" are recognized as such.

How to order a Nebraska death record

You can order a Nebraska death certificate by postal mail, or you can drop off your request in person in Lincoln. You can also order online through a pay-for-access website called VitalChek, but they do add a hefty fee to the cost of the request.

To order by postal mail, fill out the official application from the Nebraska DHSS website, and send it to them at:

You'll need to include their fee, which as of December 2019 is currently $16. However, you should verify that this is still correct by calling their 24-hour recorded phone message at (402) 471-2871 to check the latest fee.

You'll also need to include a photocopy of your official ID.

Interested in learning more about Reclaim The Records and our work to obtain and publish genealogical and archival data through Freedom of Information requests? Stay up to date with the latest news by signing up for our mailing list. We send out newsletters about once a month.

Did you find this website helpful? If so, please help us bring even more public data back to the public.

We're Reclaim The Records, a 501(c)(3) non-profit organization founded in 2015, made up of genealogists, historians, researchers, journalists, and teachers. We use Freedom of Information requests to acquire and publish archival data sets, public records that have never before been available, or not available online.

We focus on government agencies, archives, and libraries that have previously been unwilling to share their data. And if they don't follow the law, we file lawsuits to make them turn over the records. As of December 2019, our organization has filed nine lawsuits (so far) against government agencies large and small, with four decided or settled in our favor, one decided in our favor but currently on appeal, and three still pending.

We put all the data we win online for free public use, without usage restrictions. After all, our taxes already paid for it and it belongs to all of us.

This data is in the public domain. There are no usage restrictions or copyrights attached to it. Feel free to use it however you'd like. But if you put it on your website or transcribe it, Reclaim The Records would appreciate a reference note in your "about this database" source box, and/or a link back to our website, just to acknowledge the work and initiative that went into researching and releasing these records back to the public.

Help us do more

MAKE A DONATION ONLINE AT RECLAIMTHERECORDS.ORG

We're a 501(c)(3) as recognized by the IRS, our EIN is 81-4985446, and donations are tax-deductible in the United States to the amount allowed by law. Your support helps us acquire and publish more records for more cities and states.

If you have any questions or issues, please reach out to us at [email protected].

Thank you to the Nebraska Department of Health and Human Services for working with us, for fulfilling our Nebraska Public Records Law request quickly, and for not making us have to file a lawsuit against them.